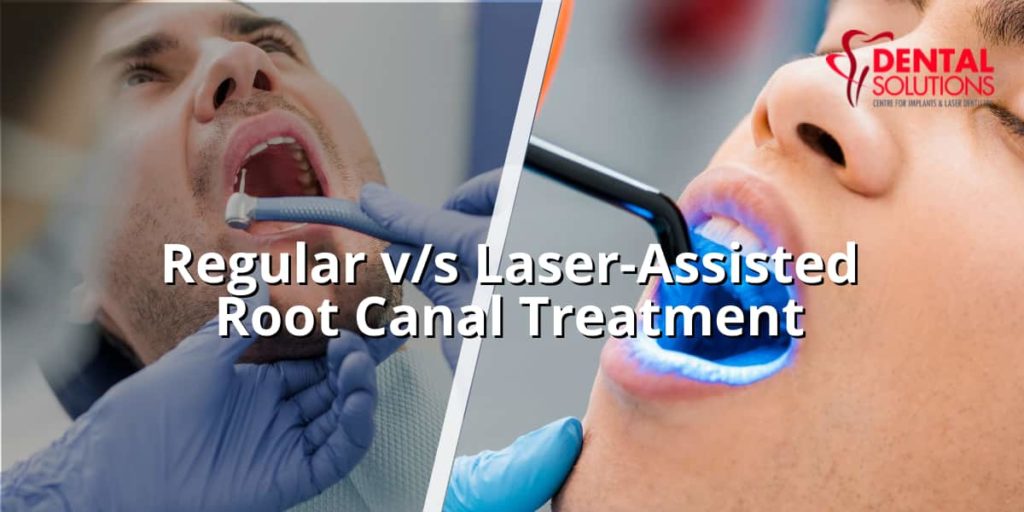 The use of LASERs has been a successful practice in the medical field for decades. When it comes to dentistry, there has been a strong development of lasers in this field too. That’s because lasers can be efficiently used to treat two of the most prevalent oral ailments: tooth decay and gum disease.

The popularity of using Lasers in dentistry is also linked to its safe and effective results in all dental treatments. The Food and Drug Administration (FDA) has approved the use of lasers by dentists and we are proud to be one of the dental clinics in Bangalore using laser technology for dentistry.

Among the few endodontic procedures that laser dentistry is used for, Root Canal Therapy (RCT) is one of the most common endodontic procedures. While drills and other dental tools have certainly been used for centuries to remove the infected pulp from a decayed tooth, the additional use of laser in the treatment has made quite the changes in the Root Canal Treatment.

Root canal procedure is one treatment that is feared by many. With the advent of lasers in endodontics, root canal therapy is no longer a scary dental procedure. Laser-Assisted Root Canal therapy has shown to be more beneficial compared to conventional root canal treatment in terms of pain and disinfection. Dental lasers offer a high degree of accuracy and safety compared to conventional methods.

Before we go further, let’s briefly understand why root canals are performed?

If a tooth is seriously decayed or damaged, the pulp, a mass of connective tissue that resides within the center of the tooth, can get infected, inflamed and swell. This condition is called pulpitis and usually occurs when the protective layers of the tooth, and the dentin, are injured, leaving the root exposed. There are cases where the inflammation can be treated by treating the cavity or other correctable cause, however, a case of irreversible pulpitis often requires a root canal if the tooth can still be saved. Root canal treatment is a common dental procedure used to save an abscessed or infected tooth and prevent the need for dental implants or bridges.

To save a tooth affected by pulpitis, patients should seek prompt treatment and should immediately consult a dentist if the following signs and symptoms are noticed:

With conventional Root Canal Treatment, there are challenges with guaranteeing that the entire affected area has been disinfected fully. Hence, reinfection is very much possible. However, when conducting laser-assisted root canal therapy, reinfection rates are drastically reduced.

How does a laser work?

The laser emits an energy beam that can cut into all sorts of materials like teeth and gum tissue. The laser treatment works by producing non-thermal photoacoustic shock waves – i.e. it uses two laser wavelengths Er: YAG and Nd: YAG,/Diod making the best use of the unique laser-tissue interaction features of each wavelength. Er: YAG induces shock waves in the cleaning solutions and Nd: YAG has a superior bactericidal effect. The canals and accessory canals are clean debris consisting of bacteria and infection. When the laser is introduced into the tooth access, you see the solution pulsating with the debris of dead tissue streaming out of the access hole making the canals free of dead tissues.

Laser-assisted root canal treatment has a high level of precision and allows dentists to target specific areas that are being worked on without harming the surrounding gum tissue. Additionally, most procedures performed with lasers do not require anaesthesia. If pain is something that makes you nervous about undergoing root canal therapy, talk to your dentist about laser-assisted Root Canal therapy. However, please remember, Laser-assisted Root Canal Treatment does not eliminate pain completely, the pain is simply much lesser compared to conventional methods.