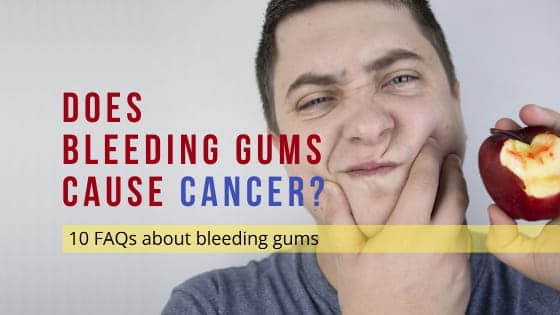 A research in the Journal of International Society of Preventive and Community Dentistry provides necessary information on dental health in India. It is identified that 95% of the Indian population suffers from periodontal disease.

Below are answers to some frequently asked questions about bleeding gums to help you identify the optimal solution.

What is bleeding gums?

Bleeding gums is a frequent loss of blood from the gums and could be a symptom of some underlying disease. It is normally a sign of gum disease, gingivitis, harsh & vigorous brushing, or a vitamin deficiency.

Can bleeding gums be a sign of something serious?

Sometimes, bleeding gums can be a sign of something more serious such as leukemia, periodontitis, or a lack of platelets.

How to fix bleeding gums?

You can fix bleeding gums via some simple home remedies such as practicing good oral hygiene. This involves brushing your teeth, massaging your teeth and gums, gentle flossing etc. It is also advisable to stop smoking and ensure you don’t have a Vitamin C &K deficiency.

It is advised that you consult a dentist if the bleeding is persistent and frequent. This can help in determining the right cause and treatment. If left untreated, bleeding gums can result in more severe conditions such as periodontitis.

When should I be concerned about bleeding gums?

Bleeding gums are not only a sign of dental disease but can sometimes signify serious medical problems. You must be concerned if the bleeding does not stop in a couple of days or home remedies show no impact. It is essential then to check with your dentist and seek professional treatment.

What are some home remedies for bleeding gums?

Some simple home remedies to treat bleeding gums are:

Using a mouth wash: An antibacterial mouth wash can both treat and prevent bleeding gums. It is good to make it a part of your daily oral care to promote overall oral health. It is also essential to brush and floss regularly for healthy gums, gum lines and teeth.

Using the right toothbrush: It is advisable to use a brush with soft bristles and replace it every few months.

Use a cold compress: Ice packs can help in soothing the pain and swelling caused by bleeding gums. It is however not a treatment to stop bleeding gums.

Read our article, How to care for bleeding gums at home during the pandemic for more tips.

Does flossing cause bleeding gums?

If you have never flossed before, the gums may bleed the first few days. This could also be due to gum disease. It is important however to continue and floss gently to get rid of the plaque in between your teeth. The bleeding will normally stop in a week or two.

Regularly rinsing the mouth with saltwater could heal bleeding gums. if the bleeding is because of bacteria, the saltwater helps in reducing this bacterium and heals bleeding gums.

How does a dentist treat bleeding gums?

A dentist will first identify if the bleeding gums is a result of dental concerns or some other underlying health issues.

Some of the dental treatments used are: scale and polish, root planing, periodontal surgery antibiotics etc. These treatments are based on the level of infection of the gums.

How is laser used in treating bleeding gums?

Laser is normally used in treating periodontal disease to remove plaque and tartar from the patients’ teeth.

Lasers are a safe and painless way to kill harmful oral bacteria, reshape gums and they enable you to preserve teeth that could have been lost during standard treatment for periodontal disease.

Gum disease: It is a disease that involves red and swollen gums.

Gingivitis: irritation, redness and inflammation of gums around the base of your teeth.

Periodontitis: Chronic inflammatory form of gum disease that is triggered by bacteria.

Leukemia: Cancer of the blood-forming tissues of the body, comprising the bone marrow and lymphatic system.

Plaque: Sticky film that forms on the teeth in which bacteria proliferate.

Scale and polish: professional cleaning of the teeth performed by the dentist using dental tools to remove plaque and tartar.

Root planing: It is a deep cleaning under the gums that eliminates bacteria from the roots of the teeth.